Nava – that also means ‘new‘ – denotes ‘nine‘ the number to which sages attach special significance. Hence, we have Nava-ratri (9 nights), Nava-patrika (9 leaves / herbs / plants), Nava-graha (9 planets), and Nava-Durga (9 appellations).Nava Durga, if worshipped with religious fervor during Navaratri, it is believed, lift the divine spirit in us and fill us with renewed happiness.

One of these nine forms of Maa Durga is worshiped every day in Navratri.

Day 1: MATA SHAILPUTRI:The first form of Maa Durga known as “Shailputri”. Goddess Durga was born in the house of King of Mountains “Parvat Raj Himalaya”, so she is called “Shailputri” maens the daughter of mountain. 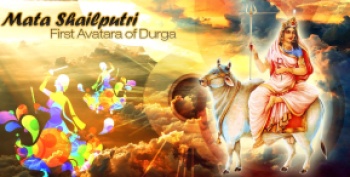 The story of Mother Goddess is written as follow in some scriptures.

In her next birth she incarnated her as Goddess Parvati, the daughter of Parvatraj Himalaya and among Nava Durgas she has been referred to as Sailaputri who was again known as Himavati. In her Haimavati aspect she defeated all prominent gods. Like her previous birth in this life also Maa Shailaputri (Parvati) got married with Lord Shiva. The first and the most prominent among Nava Durgas, Shailaputri is of immense importance and her glories are endless. On the first day of Navratra worship it is she who is worshiped. The embodiment of the power of Brahma, Vishnu and Shiva, she rides a bull and carries a trident and a lotus in her two hands.

Certified parenting teen practitioner, multiple Award winner, mother of two active kids believes in sharing the right source of information to readers which could help them in every possible way!!

This site uses Akismet to reduce spam. Learn how your comment data is processed.